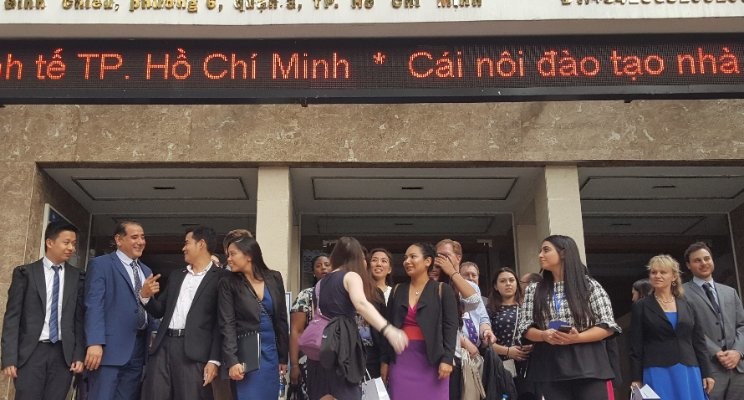 We are heading into “the Era of Connection”, “the Era 4.0”. If you want to become fully integrated into the global community, you should not take your network building skills slightly, as it is one of the top 5 most important skills in the future, according to “The Future of Jobs” report conducted by World Economic Forum in 2017.

The art of building strong relationships and how to expand your social circles have always been of concern to many of those in UEH Connected community (which has approximately 6,000 members from various backgrounds with different nationalities).

Coming from a poor countryside with low social status, no identity, no business relationship and not being able to study abroad nor at an international university, I have been fortunate to meet, to connect and work with numerous leaders and business people from all over the world. Moreover, I am trusted by foreign business communities in Vietnam such as the French, the American and the Australian.

Partners from Thailand, Taiwan, Korea, Singapore and the Philippines usually get in touch with me when they want to participate in trade promotion programs or need an insight consultancy when they wish to expand their business in Vietnam via private channels.

There were many times I received questions, texts and emails asking me how I built my own network. To be honest, my secret is very simple – I have built it with my sincerity.

This is my very first sharing with our community about the topic “How to Build Your Network”, on the occasion of the 4th anniversary of YSEALI – Young Southeast Asian Leaders Initiative, at which I am taking part in as a former member.

These days, a majority of young people think of it as a list of Facebook friend list with many popular names in it, and they pride themselves on having lots of name cards that were taken from social and networking events.

For me, a network means that I have a person who:

Put it simply, “building a network” is turning a complete stranger into an acquaintance, then a friend, then a close friend and we trust, think of each other when we feel like sharing ideas.

How to build your network when you are still an anonymous?

Many people only care about the relationships they have in the outside world, while forget about their family having a strong bond with other family members should be claimed as their top priority. If you cannot even get close with your family, how could you create a strong network with the strangers out there?

Back to the main question, nothing can be successful without well preparation.

When sending a friend request on a social networking site, do you explain why you want to connect with that person?

Before attending a social event, do you look up to the people you want to get in touch with?

Before approaching a person, have you got any idea about who they are, what they like, what interests them, how about their profession and the field they specialize in?

Anyone of us wants to be cared about, to be remembered, and in order to be treated so, we should treat others like that first.

But in random cases, is there any formula that helps us to connect with others more easily?

Most expect to learn some tricks (or you can call them “tips”) to impress people in the under 30 seconds at the first meeting, or how to get to know many people in one occasion, or how to start an intriguing conversation with a stranger.

However, bear in mind that these tips may provide you with some unexpected side effects, making you appear boring to people. But why is that?

Everyone has their own unique personality, their own interests, and therefore if you approach all of them in the same way, you are creating a dead-end to yourself.

Your sincerity, combined with careful-preparation, good observation, sophistication and ingenuity in communication make a recipe for success in connecting with people.

How do you develop your network?

There are 5 key words you need to keep in mind:

There is no relationship that can grow strong without conversations. These come as simply as a “how was your day?” phone call, hand-written cards on special occasions, or even the emails/texts you send one another telling about things in your lives.

Being human, we have the tendency to be listened and to be respected. If you want someone to like you, you should first respect them and be willing to listen to their ideas.

Before “take”, learn how to “give”. Showing up and providing help at the right time mean so much more than thousands of words of cliché promises. Just enough attention and just enough subtleness make up the ingredients for this recipe.

I have a friend, who started his career as an employee at a quite well-known company. Back then, he saw that his boss was almost always late for work, yet would always leave early for home – which was strange and unusual compared to his calm and professional working manner. A while later, my friend figured out that the boss had two little kids and it was his job to take them to school every day. Being a kind person who adores kids, my friend offered to help his boss, taking over the duty. After 5 or 6 times turning down the offer, the boss finally accepted it.

As for my friend, he did great as a baby-sitter and was never late for work, despite having to wake up an hour earlier and traveling a few extra kilometers every morning. However, thanks to doing that, he got closer to his boss, and therefore learn more from him, such as how to organize his life better. Moreover, the boss sometimes gave my friend books about how to improve his professional skills.

After a few months, his company carried out a big project. Having considered carefully, the boss decided to let my friend take the lead in the project. Although my friend’s ability might not be as good as other colleagues’, he earned himself a big plus in terms of observation skills, problem solving skills, and his ability to work with people.

As you can see, if you build your network with sincerity, you will always get back what you deserve – love and trust from people around you.

Why do you want to connect with someone? Because of benefits! Whether it is tangible or not, it is certain that once a relationship is formed, it is because the parties involved see their benefits in it. Identifying your and other people’s value help you understand who should stay inside your “network circle”, and do not forget to added create value to your relationships.

After 75 years of research and four continuous generations of scientists, those at Harvard University have finally found out the most important thing that brings about happiness in one’s life.

“It’s not just the number of friends you have, and it’s not whether or not you’re in a committed relationship, but it’s the quality of your close relationships that matters,” said Robert Waldinger, an American psychiatrist and a Professor at Harvard Medical School.

Keeping promises is an important factor in building your own personal brand. Keeping promises helps creating trust – the thing that people in the modern society usually lack of, and might hesitate to give one another for the fear that people will betray them. In some worse cases, people take promises with their family members lightly, thinking that “they will understand”.

Five years ago, when my network was yet to be strong, I did not have as many global relationships as well as trade promotion projects as I do today. But thanks to keeping one promise, my career path has changed completely.

There was a Vietnamese French coming back to Vietnam with the hope to help build bridges and schools in the poor countryside of Southwest of Vietnam. The man wanted to find someone who could assist him in sorting out the paper work in order to establish a non-profit organization in Vietnam. At that time, I was studying law, and was confident with my ability to get the work done easily and therefore I made a promise to help him. I was happy that I was doing something helpful for villagers in the region as well. Nonetheless, things did not go as I expected, as it turned out it would take me approximately tenfold the amount of money I had anticipated, and almost a year to get all of the necessary paper work done.

I had to face two hard choices: (1) Keeping my word, using my own money to get things done or (2) Breaking my promise.

I went with the former. I stayed at the Department of Planning and Investment for around a week, asking from one to another for a less costly way. And it worked. I did find out a way that was much cheaper and faster to get all the work done.

After 6 months, I eventually finished my task, and it was also the time when the name “Cong-Thang HUYNH” became valued in the French community. 8 out of every 10 French people coming to Vietnam get in touch and agree to do business with me.

After a long time, I have gained myself a lesson “Planting too many seeds yet spending no time on taking good care of them is like ending their lives”